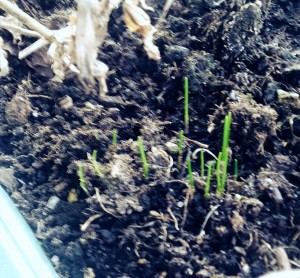 For the second year in a row, our chives have survived the winter. They seem to be the first plants that show signs of life on our balcony, so chives = spring.  I’ll be so glad to have them again. Before I grew chives, I thought they were just to garnish a baked potato with sour cream, but now, I put them on scrambled eggs, on soups and sauces, in salad. It’s hard to think of a savory dish that wouldn’t benefit from their mild flavor and dash of color. Because they have a delicate flavor, it’s best to add them just before serving. Chives aren’t something that would stand up to lots of cooking time.

Originally, I bought a pot of chives, but I’ve also grown them from seeds. If you decide to try seeds, they’ll sprout within two weeks and be mature and flowering after three or four months. Just snip the grass-like leaves and add them to your dishes. The clusters of flowers are edible and can be added to salads or used as  a garnish. If you leave the blossoms on the plant until they go to seed they will replant the area, or you can collect the seeds as the flower start to dry to have some control over where new plants sprout up, or to start a pot of chives for a friend.

How about you? Do you grow fresh herbs? I urge you to give it a try. If you have herbs growing on your windowsill or just outside your kitchen door, let me urge you to snip them and use them. That’s often my hangup. I forget they’re there, or I just use my usual ingredients without thinking what I could add that would make a dish more interesting. When I think about it, I’ve found that any mixture of snipped fresh herbs will make a plain salad delicious. Anything that has us eating more plants has to be a good thing, right?