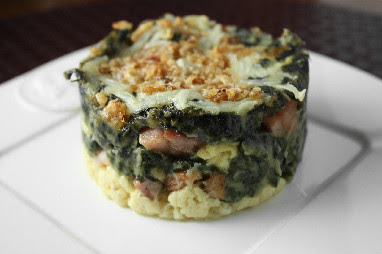 This dish was created by Paula Davis and originally titled Eggs Richard II after her husband, Dick, who was my husband’s friend and squadron commander while we were stationed at Torrejon AB, Spain.  I had many reasons to be happy about Ed’s promotions and increased responsibility in the squadron, and one of those reasons was that we were invited to have dinner at the Davis home more often.  If Paula was cooking, you knew it would be good.

I often fix this casserole for a holiday breakfast.  I love the fact that it MUST be made the day before.  The day you’re serving, all you have to do is pop it in the oven.  And that’s a good thing; because after the prep, there will be stack of dirty dishes.  I used to feel this was a long, complicated recipe, but I’m in my seventh month as one of Rose’s Heavenly Cake Bakers, so my idea of what constitutes a long, complicated recipe has changed.  In both cases, Rose’s cakes and this egg dish, it’s well worth the effort.
Ingredients
3-10 ounce packages frozen chopped spinach
8 strips bacon
1 cup cubed ham
1 stick butter, divided
1 cup flour
4 cups milk
2 tablespoons instant minced onion
Seasoned salt, pepper & Tabasco to taste
18 eggs
1 1/2 cups evaporated milk
1/2 cup canned French fried onion rings, crushed
1/2cup grated Monterey Jack cheese