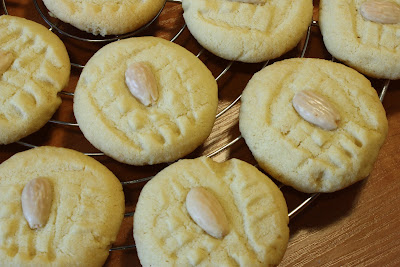 In need of a baked goody to say thank you to a new Armenian friend, my first thought was to make one of Rose’s Heavenly Cakes, I may still do that in addition, but I decided that Armenian Almond Cookies were a must do.

Our friend, whose name I’m not sure how to spell, is called something like Zorro. I know that’s not the spelling. He has imigrated to Poland and operates a business preparing kabab meat for the many kebab restraunts in Poznan.

We met at a party one night. We were among the  first to arrive. He spoke Armenian and Polish, only a word or two of English. Yet he found a way to tell us about his home land, thanks to YouTube videos, and he also told us the names of all the famous Armenian Americans.

He brought some meat from his business to cook for the group later that evening, so I followed him into the kitchen, and with sign language, my limited Polish and his limited English, he shared his recipe for the spice mixure and the sauce that he whipped up on the spur of the moment.

I wanted to do something to show my appreciation for his generousity and hopefully remind him of home, and I know he appreciated the gesture. These tasty cookies are sure to be appreciated by anyone for whom you bake them too.

Because they’re so easy to make, I can see these almond scented shortbread cookies making an appearance again on my Christmas cookie tray.  I love any sweet with almonds, and shortbread has long seemed like a special, indulgent treat to me — ever since a friend visiting the hospital when our first daughters (not a typo, we have twins) were born brought a box of shortbread.

She said, “these are for you when you’re up during the night.”  Obviously, my friend had children, and her thoughtful gift was greatly enjoyed but never during the light of day.