Polish Potato Plum Dumplings (Knedle ze śliwkami), one of those dishes that might make an appearance for dessert, maybe it’s a side dish, what about breakfast? It’s a nice combination of flavors, plums that are both sweet and tart, the dumpling that’s a little on the salty side. I like that bite of sweet and salty, don’t you? 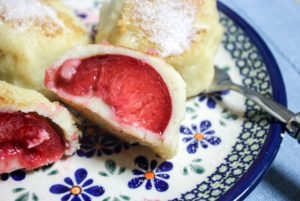 These dumplings are popular throughout Central and Eastern Europe, and you can finish them in many different ways. I simply browned them after boiling and sprinkled them with sugar. I think next time I’ll bring breadcrumbs into the mix. I think the texture will add a nice contrast.

I’ll be curious to hear how your family eats these dumplings.

A potato dumpling filled with plum and finished in a number of ways!

Finish in any number of ways:

Traditionally, the plum halves are reassembled after pitting, or it’s pitted without completely slicing it in two, and the whole plum is put in a dumpling, but I didn’t want dumplings that would be larger than a baseball, so I just did halves.