Polish Potato Pancakes!
Polska piątek (Polish Friday) #4
Placki Ziemniaczane, delicious Polish potato pancakes
If you enjoy these two recipes, how about sharing the love and passing this post along to your friends? 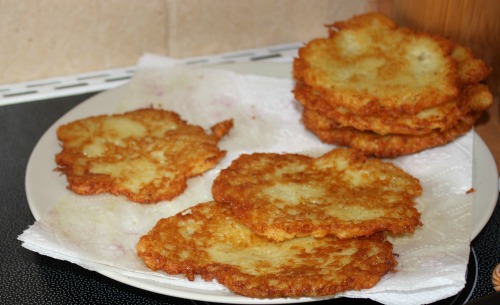 I was so thrilled to get my copy of Nela’s Cookbook.  It’s a cookbook written by Nela Rubinstein, wife of famed Polish American pianist Arthur Rubinstein. Her recipes are Polish, Lithuanian, and American, and I was thrilled to see a recipe for Polish potato pancakes!

If you’d like to check it out, my Amazon affiliate link is above. I love it.  The cookbook, published in 1983, has drawings illustrating techniques, and it’s written as if it were a food blog.

Every recipe is preceded by a little story; Nela might talk about the source of the recipe, what she serves with it, or some family chuckle related to the dish.

Nela makes her potato pancakes a little differently than other recipes I’ve seen.  She uses no flour – preferring instead to use the potato starch that has drained from the grated potatoes. It was the first recipe I tried from the cookbook. 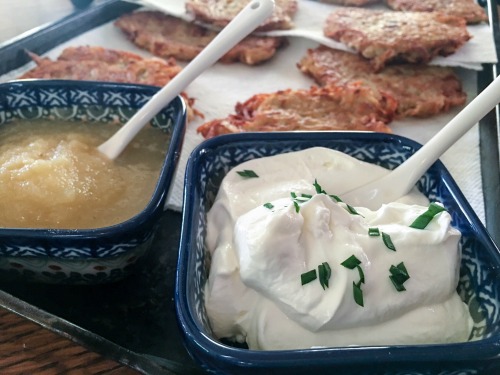 I made two different recipes – Nela’s and one found on All Recipes.  Before I give you more details, let me say how thrilled I am to have mastered potato pancakes.

I’ve been trying to do this for years, only to end up with a batter that dissolves in the oil.  Where did I get the crazy idea that I was supposed to use mashed potatoes?  No matter what I added – flour, egg, or how I handled the dough – disaster.  Not any more. 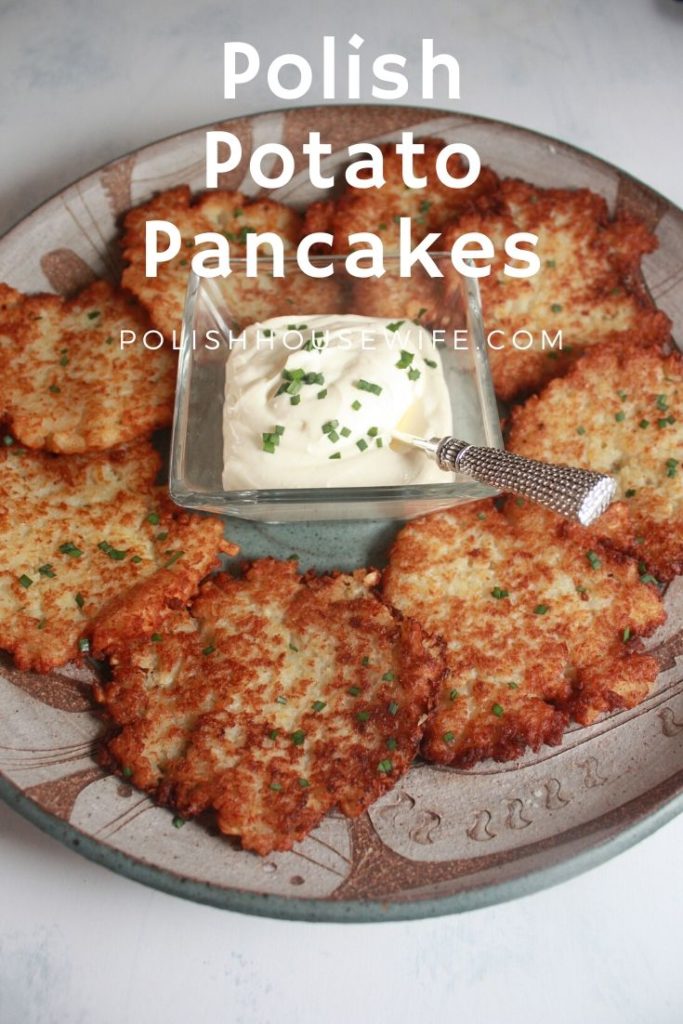 First, I made the recipe that uses flour.  Grating the potatoes was time-consuming; other than that, it was very easy.

Which method did we prefer? 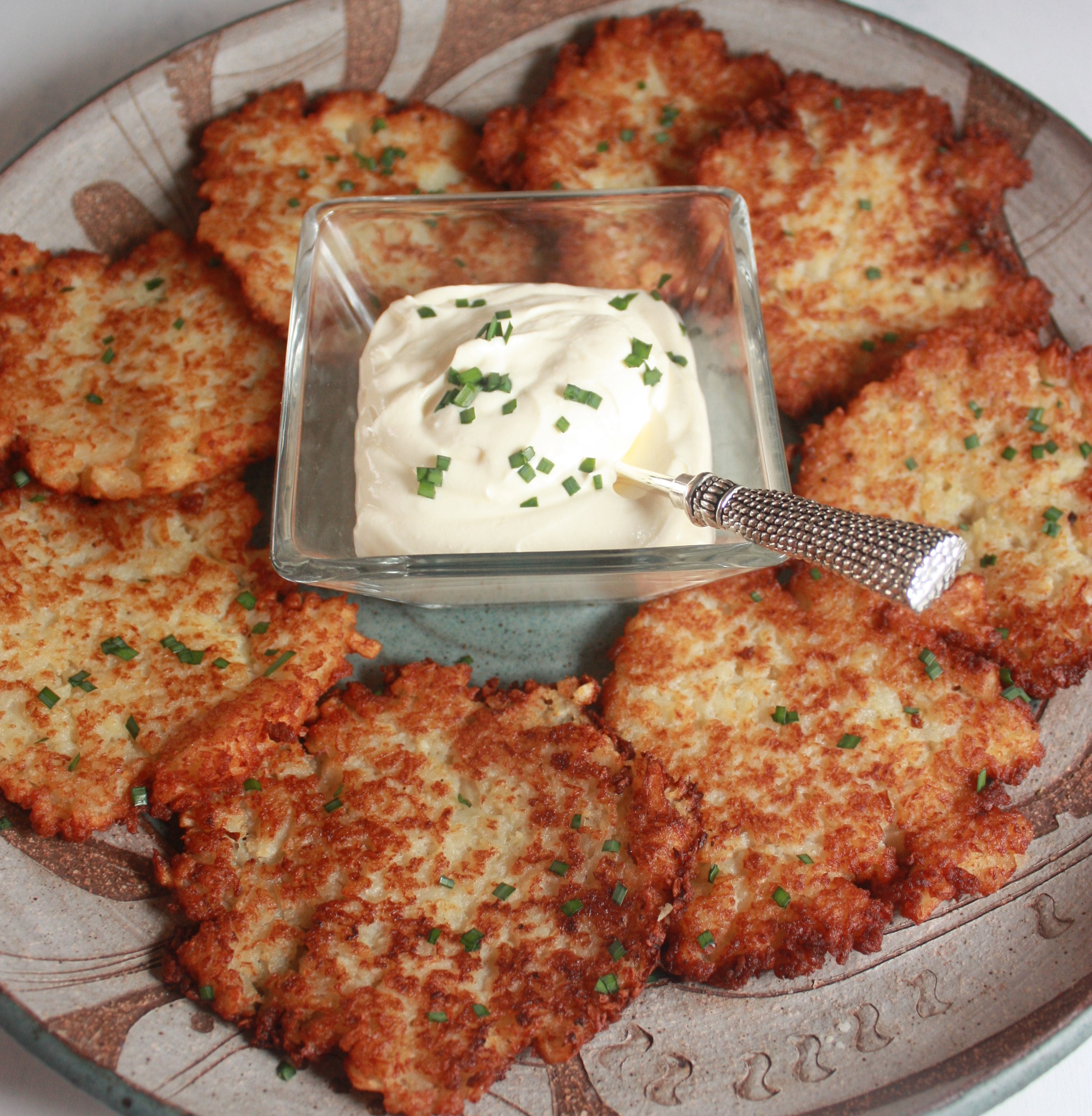 Now, we make the basic recipe, the first one below. I do use Nela’s suggestion of grating the potatoes and onion for my Polish potato pancakes with my food processor. To me using flour rather than relying on collecting the potato starch, just makes sense, it’s faster and easier, and a sure thing.

The mixture was just a little more cohesive than the one with only potato starch. If I needed to make the pancakes gluten-free, it’s nice to have that option, but it’s an option, I’ll save for special GF occasions. I include it here in case you need GF.

You’ll notice in the video that the mixture does get watery as it sits. Just give it a stir and keep on cooking.

In this case, it also oxidized a bit, turning darker because we took the time to set up the camera, but the color corrected itself as the pancakes cooked.

You’ll also see in the video that I turn the pancakes around and over. Before flipping them, I rotate them halfway in the pan because the part in the center always browns faster than the outside edge of the pan.

Can you spot the cameo appearance of by Ellie, one of our two new dogs? She and Rigby joined our household a couple of months ago from Bichon FurKids Rescue.

Finally, let’s get around to serving these crisp and tender creations.   We love Polish potato pancakes topped with Gulasz or Pork Goulash.

Polish friends have told me they like to eat them with sugar and cinnamon, or maybe sour cream.   How about sour cream and a dollop of caviar?  The possibilities are mouth-watering.  Oh yeah, plain is really good too. 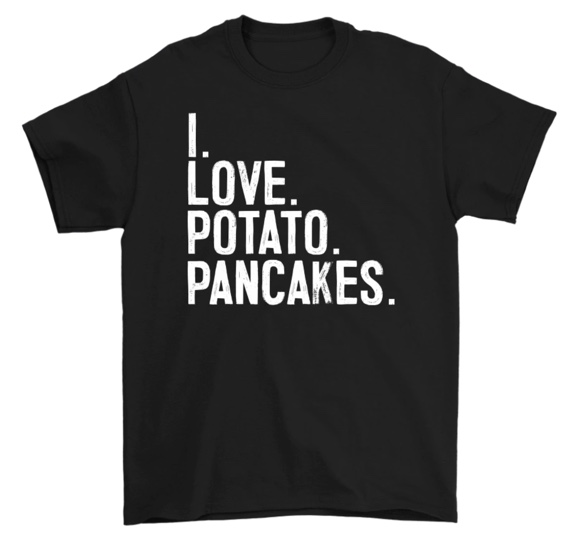 I love potato pancakes t-shirt – click on the photo to buy it at the Polish Shirt Store!

(Amazon pays me a few cents for purchases via these links)

A potato pancake recipe that uses flour to thicken